What are the system requirements for plugins by Playfair Audio?

How to uninstall your products? Where are the plugins installed?

You can completely remove our products from your computer by deleting the respective plugin files in the follwing install locations.

I've installed the plugin but it doesn't show up in Logic (or another AU host). What's wrong?

From macOS 10.13 (High Sierra) on, under some circumstances newly installed AU plugins are not found directly after installation.

Rebooting your computer usually solves this. Alternatively – if you feel comfortable using a command line terminal – you can restart the AudioComponentRegistrar service by opening a terminal (under /Applications/Utilities/Terminal) and entering the following command:

Do you offer refunds?

We do not offer a refund policy for purchased and successfully delivered licenses.

To make sure that our products are right for you, we strongly encourage you to use the 14-day free trial period that we offer on all our products. These trial licenses are fully functional and enable you to test all features and compatibility with your setup before making the purchase.

Why is the latency so high?

Dynamic Grading’s algorithm requires some amount of lookahead time for best results. As the actual required latency depends on the response setting, and most hosts do not deal very well with variable latency plug-ins, we have to report a constant worst-case latency to the host. Currently this is the best way to provide a consistent and smooth user experience throughout different host software.

Can I somehow adjust the input and output levels?

Yes you can! In Dynamic Grading, you can easily adjust the output level by moving all target handles (the ones to the right) at once. To do this, just grab the middle of the target body range and move it up or down.

Similarly, you can move all handles together by grabbing the middle of the source body range on the left. This corresponds to adjusting an input gain and at the same time compensating the output gain in opposite direction, which is useful when you want to adapt to a changed input level in a neutral way.

An additional parameter to control a dry/wet mix is the most requested feature for Dynamic Grading, even back during the private test phase. At the same time, it would be the easiest to implement. So why don’t we just add it?

Parallel “New York Style” compression is a widespread technique where you add a heavily compressed version of a signal to the original one. That way, you get a more compact signal, but without sacrificing the liveliness of transients. Sometimes it’s also described the other way around: “breathing some life back” into an overcompressed signal by adding some of the original signal. There are countless articles and videos on the web explaining how to do it.

Here’s a typical New York Style setting in Dynamic Grading, where the body range is compressed while the high and low tails are remain unchanged. 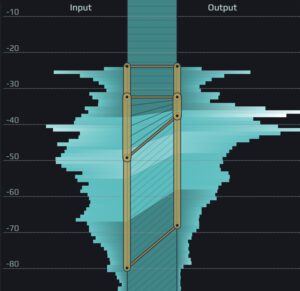 The graphic approach makes it much easier to use this classic compression recipe with intention and tailored to the track you’re working on. Adding a dry/wet mix on the other hand would obfuscate the clarity of Dynamic Grading’s approach to dynamic processing.

What copy protection method do you use?

Playfair Audio uses iLok by PACE Anti-Piracy Ltd. for copy protection and license activation. To use our software, you need to have an account on iLok.com and have the iLok License Manager installed. If you have not used iLok before, please go to iLok.com to sign up and download the License Manager.

On how many (and which) locations can I activate your products?

Licenses for Playfair Audio products can be stored on an iLok USB key (2nd generation or later), the iLok Cloud or your local computer. You can activate the licenses on up to 2 locations simultaneously.

How do I activate the plugin (trial or perpetual license)?

Just download and install the product. When you attempt to open the plugin for the first time, you are prompted to either activate the 14-day trial period or enter an activation code (available for purchase on our website).

Can I sell the license to someone else? Do you offer a license transfer? Are there any fees?

Yes, you can sell and transfer your license to another person using the iLok License Manager. The license transfer is subject to a fee ($25 per license) charged by PACE.